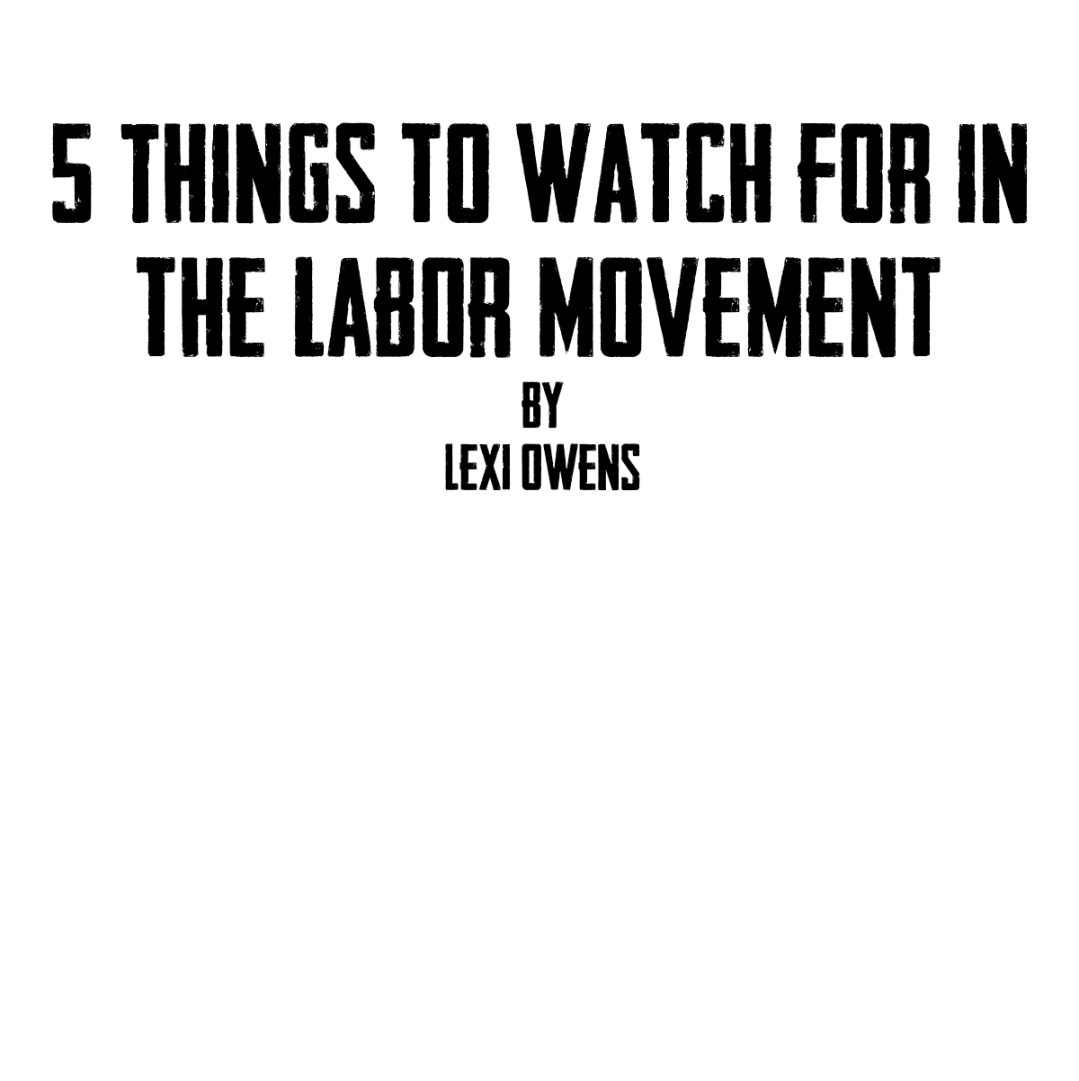 Five Things to Watch for in the Labor Movement

Five Things to Watch for in the Labor Movement

The effects of the Janus case may not be felt for several years. The continued rollback of union rights and the landmark Janus decision will undoubtedly pressure the labor movement’s conservatives to redouble their efforts to expand their influence, so the leftist community must be prepared to deal with them. None of these trends are new, they are the result of 150 years of developments within the labor movement.

In times of crisis–like we are in–we should expect conservatives to step up their efforts to undercut the rank-and-file, punish workers for stepping out of line, and turn to the Democratic Party to save Labor, all of which will ultimately hurt the labor movement in the long term. And we should also be aware of other groups on the Left which seek to build their own power at the expense of workers.

Since the late-nineteenth century, the business unions (those that collaborate with capitalists rather than challenge them) have always tried to centralize power in their leadership while undermining rank-and-file organizing. From signing contracts that bargained away strike rights to working with the government to force workers to accept abysmal conditions, business unions rely on undemocratic and hierarchical structures to maintain control over their membership.

Now that they are presented with a fresh crisis from the Janus decision, these conservatives will turn their ire on both radical workers within their own ranks as well as the rank-and-file concept itself. Labor leaders know that the biggest threats to their power post-Janus are workers refusing to join unions in the public sector as well as the cessation of “fair share” fees that helped build up union bank accounts. Many rank-and-file members–even if they are themselves conservative–have shown tremendous organizing abilities which defied union leadership, like the West Virginia teachers’ wildcat strike this spring. And with a National Labor Relations Board that is at best unreliable, and while unions hemorrhage money, labor leaders will be forced to call their rank-and-file to heel. While they talk big about solidarity and fighting back, unions will continue to sign terrible contracts, like the UAW did at the University of Washington this past summer, when they refused to support real actions that might actually help workers. Because empowering the workers is actually dangerous for business unionism: when workers are in control, they generally fight hard and they win, challenging the basic structure of the business unions and making their “leaders” obsolete.

The labor movement will fail or it will devolve into bourgeois politicking if the rank-and-file do not have democratic control over their unions. Already, the business unions–in the industries where they retain some shred of power–have abused their undemocratic structures to entrench corrupt bureaucrats in power. The Teamsters leaders declared that a new contract with UPS was ratified, despite a majority of their members voting against it. The AFL-CIO’s own employees will be walking out to protest low wages and bad-faith bargaining. And we already witnessed how education unions’ rank-and-file went out on wildcat strikes in defiance of both union leaders and state governments.

The leaders of business unions often reject the fundamental principles of democracy to maintain “labor peace.” Democracy is antithetical to labor peace, capitalism, and business unionism, and therefore they must oppose it.

Opportunists trying to cash in

We must be wary of business unions that talk about solidarity while undercutting their own membership, and we must stay vigilant against opportunists attempting to seize popular momentum for their own goals. On the Left especially–which is siloed in many different organizations with a vast array of ideologies–there are opportunists who are ready to thrust themselves into the fray to amass power for themselves.

The first of these opportunists are the “entryists,” small and marginal radical organizations that attempt to infiltrate larger organizations with the intent of furthering their own agenda. Historically, these small groups attempt to place their members into positions of power so they can gain access to resources and members that were previously unattainable. This cannibalistic entryism can have two effects: radicals who join less radical groups waste their time and energy trying to reform the larger group; or less radical groups become fractured from infighting over how the organization should function. Both are a net loss for the labor movement. Some have argued that the Democratic Socialists of America (DSA) support entryism because they are trying to reform the capitalist Democratic Party, for instance.

The second group of opportunists are the organizations which are seeking to capitalize on anti-Trump sentiment. One current example is the Revolutionary Communist Party led by Bob Avakian. The RCP operates through various front groups such as Refuse Fascism, Stop Patriarchy, Stop Mass Incarceration Network, and others. Former members have described the RCP as a cult of personality for Avakian. The RCP uses anti-Trump sloganeering to bring unsuspecting liberals into their orbit. For instance, RefuseFascism.org has no mention of the RCP on its front page or on any of its other “About” or “FAQ” pages, but it has very prominent donate buttons and ways to gather information from people who won’t know they are unwittingly doing the work of Chairman Bob.

Unions are already struggling to win power in the private and public sectors. What I have noticed recently in my own organizing work is inexperienced and impatient workers making the mistake of announcing their intentions to the boss too early. When a union goes public before it has an unbreakable base of support in the workplace, the boss can immediately start an anti-union campaign to destroy the organizing effort.

The strikes across the country have undoubtedly resonated with many alienated workers, who turn to unionism for a solution. Workers may call in outside help from established unions like United Food and Commercial Workers (UFCW) or Service Employees International Union (SEIU). These unions use the same old predictable strategies, and they swoop in and try to organize an NLRB election. What happens is either the union wins the election and stops organizing (no more shop floor actions, building solidarity, or recruitment) to focus on bargaining a contract, or the union loses and is never heard from again, leaving the workers to suffer whatever retaliation the boss can come up with. In both cases, the workers themselves are left without recourse or power because they announced themselves too early.

The other mistake I’ve seen is a small group of workers declares to the boss and the public that they are a union now. This group–always a tiny minority in the shop–immediately alienates a huge percentage of workers who consider themselves anti-union, pisses off other people who weren’t asked to join in the first place, and alerts the boss to their young and disorganized campaign. Suddenly, they get inundated with anti-union propaganda, their fellow workers abandon them for fear of retribution, and the unionization effort declines until the original organizers give up or are fired.

Going public early is a symptom of trying to capitalize on perceived sentiment rather than building solidarity. Union organizing takes a long time: in almost every case, organizers need to ensure they have the support of an overwhelming majority of the shop before risking going public. They have to have laid the groundwork to fend off an anti-union campaign, lockouts, scabs, and other retaliation.

In reaction to every new outrage from the Trump Administration, some group will call for a general strike, urging all workers to refuse to work until Trump’s decision is rescinded or some other nebulous goal is achieved. Most recently, there were “general strikes” announced during the Kavanaugh hearings, and others throughout 2017 and 2018. They never took hold anywhere.

A general strike has the power to immobilize the government, cripple the economy, and overturn many of the institutions that oppress us. That’s why the general strike is the utopian goal for many different leftist groups. But it is not a “general strike” unless a gigantic portion of the workforce goes on strike for as long as it takes to win the demand. These abortive one-day strikes disrupt little, can be weathered by those in power, and prove nothing. A general strike will take months or years to plan, establishing the necessary infrastructure to ensure people are fed and ready for what happens after the demand is won. If the demand is as grandiose as removing a president from power or something like paralyzing the US government, then the public must be prepared for what happens next.

Similar to tuning out noise about general strikes, labor organizers should be wary of groups that call for unclear and unwinnable demands. Often, boycotts take on unwinnable demands. Typically, a group calls for a boycott, which some number of people choose to participate in for some amount of time, but eventually the boycott loses steam, and it fails. When was the last time you can recall a group saying, “The boycott is over, you can buy these products again”? Organizers forget the basics of direct action and public pressure, and they waste time, resources, and public sentiment.

For labor, workers often want clear and winnable demands, which can be won with clear and well-planned direct action and escalation–anything from minor demands like longer lunches or major economic demands like guaranteed healthcare. Support and solidarity can accomplish all of these demands because the goals and tactics are clear, as are the conditions for success.

Unclear and unwinnable demands are vague and open-ended. “Remove the president from power” is one such demand. At first glance, it seems straightforward. But it’s neither clear nor winnable. The labor movement–however it is defined–is generally lacking in resources to take on protracted labor struggles with ill-defined goals.

This is not to say we must be overly cautious. But we should have well-defined strategic goals for the short, medium, and long term, and we should have tactics with proven track records that can accomplish the tasks needed to reach those goals. In the Seattle IWW, our short-term goals include growth in membership and organizing capacity, and we have clear plans for how to accomplish them through internal organizing, trainings, and opening up successful workplace organizing campaigns. We start with these small goals so that we can work towards larger, more impactful long-term goals that will improve people’s lives and eventually challenge capitalism itself. I say “eventually” because this movement will not be accomplished in one presidential term but over many.

[This post was originally published in the fourth issue of the Seattle Worker, available now!]