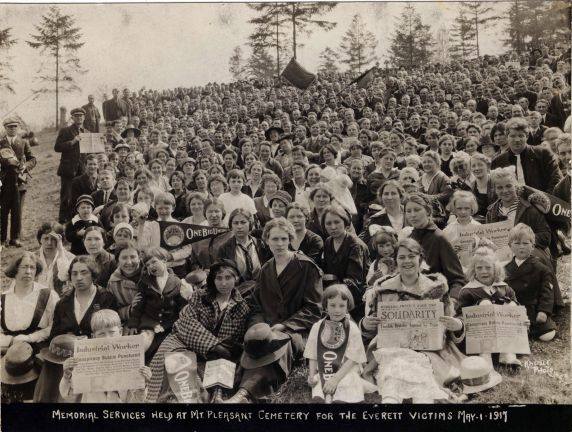 What: Centennial of the spreading of Joe Hill’s Ashes
When: Monday, May 1 at 7 PM – 9 PM
Where: Mt Pleasant Cemetery
700 West Raye Street, Seattle, Washington 98119
Price: FREE

A songwriter, itinerant laborer, and union organizer, Joe Hill was well known in hobo jungles, on picket lines and at workers’ rallies as the author of popular labor songs and as an Industrial Workers of the World (IWW) agitator. Thanks in large part to his songs and to his stirring, well-publicized call to his fellow workers on the eve of his execution—”Don’t waste time mourning, organize!”—Hill became, and he has remained, the best-known IWW martyr and labor folk hero.

Joe Hill was murdered by the State of Utah, November 19th, 1915. Two years later, his ashes were distributed and spread across the world by Wobblies. http://local.sltrib.com/charts/joehill/ashes.html

At the May Day 1917 ceremony in Seattle, Wobblies packed Mt. Pleasant Cemetery to watch Joe’s ashes scattered on the graves of the martyred Everett Massacre victims. Thousand of men, women, and children marched in four lines each wearing a red carnation. The procession was 15 blocks long!

A memorial and gathering to honor Joe Hill, and his contribution to the workers of the world will be held on the 100th anniversary of the spreading of his ashes – May 1st at 7PM. Please join us to celebrate in song and solidarity.