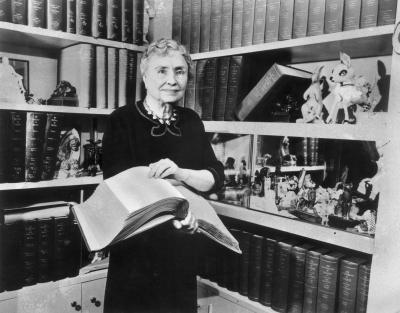 . . . I realized that the wonder is not that conditions are so bad, but that society has advanced so far in spite of them. And now I am in the fight to change things. I may be a dreamer, but dreamers are necessary to make facts!

She became a socialist after learning that too much of blindness “was traceable to wrong industrial conditions, often caused by the selfishness and greed of employers.” But she soon became impatient with a solution that depended on socialists getting elected.

The true task is to unite and organize all workers on an economic basis, and it is the workers themselves who must secure freedom for themselves, who must grow strong.” Miss Keller continued. “Nothing can be gained by political action. That is why I became an IWW.

What prompted her to join the IWW in the first place? The Lawrence Textile Strike of 1912, the “Bread and Roses strike.” Why?

Because I discovered that the true idea of the IWW is not only to better conditions, to get them for all people, but to get them at once.

Well, more than one hundred years later, we are still here, still organizing to secure our freedom. For all people over the world, and all at once.

Read the full interview, “Why I became an IWW,” on the IWW web page.