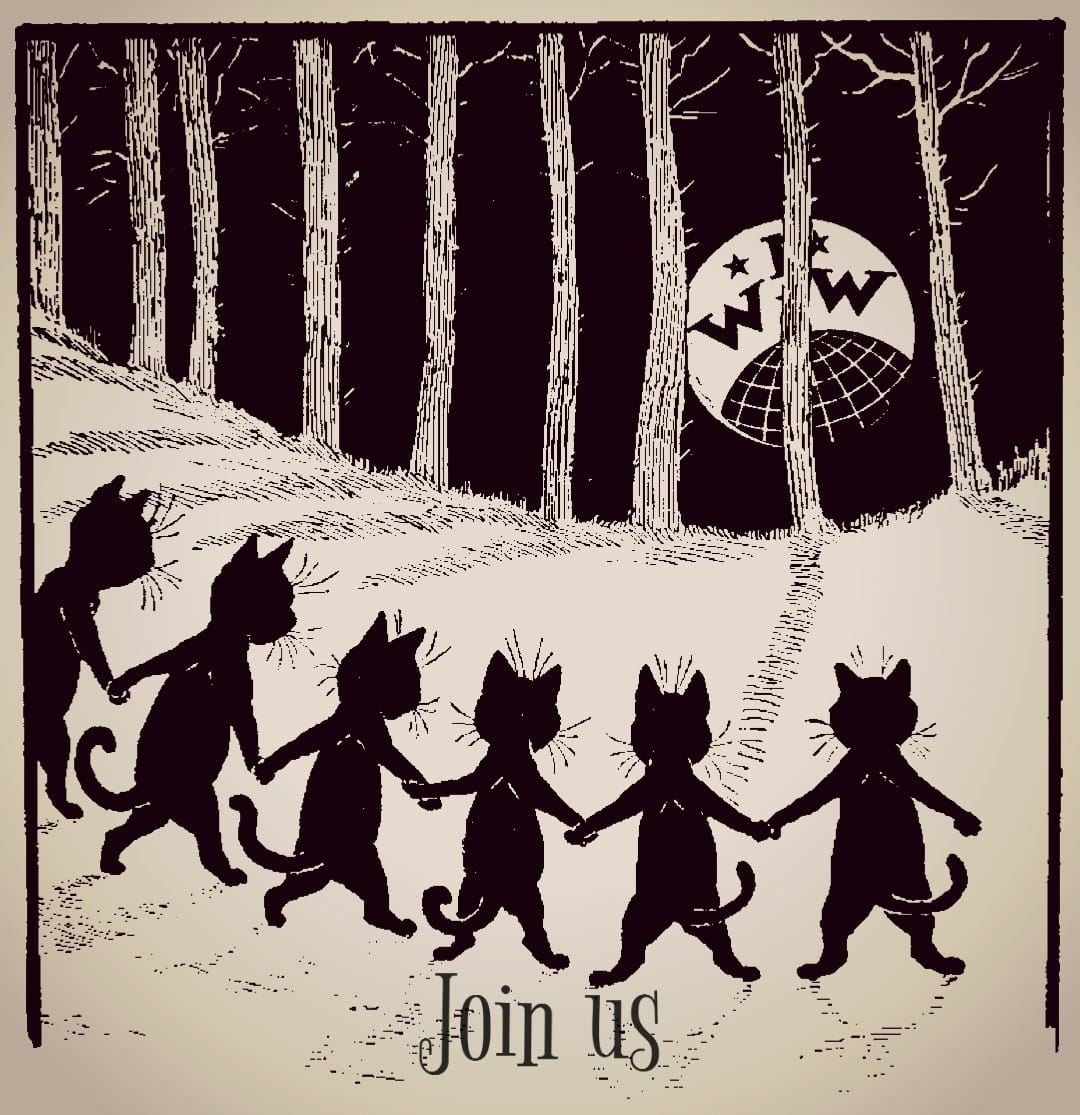 Who Are the Wobblies?

Editor’s note: I’d been a member of the IWW for a while, but I didn’t really know what that meant until the 2011 Wobbly Campout, held at Belfair State Park. After a weekend of laid-back conversations with fellow workers across the Pacific Northwest, I interviewed Fellow Worker D.J. to get the inside scoop.

DJ: Well, the IWW is a union of workers who have come together to try to change the world.

Ed: How long’s it been around?

DJ: The IWW organized in 1905 and had a slow start. They originally organized thinking they could change things through the political system. By 1908 they realized that political change had to come from the working class, through power. They started formulating the idea of the general strike at that time. If all workers were organized into one big union, at a given time everybody could stop working and show who had the power, and then. . . build the dream!

Ed: What did the IWW win for people?

DJ: Self-respect. More than anything else, it gives people the confidence to believe in themselves.

Ed: What does it mean to be in “One Big Union” compared to other unions like the AFL/CIO or SEIU?

DJ: First of all, the difference between the IWW and other unions is that other unions seem to just want a slightly bigger piece of the pie for their own members, and the IWW wants to have a whole new pie for everybody. How many fights has the IWW had for individuals who don’t even join the IWW? We support them as workers, to help them out, not just because it’s going to help the IWW out.

Ed: What about dual carding, where someone belongs to the IWW and another union?

DJ: Dual carding happens if an individual belongs to a business union and then finds the IWW and joins it, or vice versa, they’re a Wobbly and they get a union job. As an IWW member you should actually believe in shop floor democracy. So that if you’re going to carry shop floor democracy on to the job, you should start slowly sounding out your fellow workers, and when things are coming down from the top down, you should make sure everybody on the floor understands the union belongs to them, not to the company boss and not to the union boss.

Ed: What do you mean by “business union”?

I think that the members within the IWW who get a union job, it’s on them to start educating their fellow workers about workers, working power, and the working class.

Ed: What do you mean by “the working class”?

DJ: If all you’re doing is selling your time and knowledge and your energy or a check, and if you can’t hire and fire people, you’re working class. If you’re a doctor, a pilot. . . We have tons of people who are lawyers and everybody thinks they’re making oodles and oodles, but they’re just working for a corporation. If they don’t make that corporation enough money, they’re down the road. The demands on them are huge as workers.

DJ: If you get a managerial position, then as Gordon calls them you’re the “suck-*** class.” (Laughs)

Ed: And when you talk about the “shop floor,” what kind of workplace would that be?

DJ: A workplace in any industry. And our industries are everything from sex trade worker industry, whether people work in restaurants, whether they drive buses, whether they work on boats like I do, it’s just the job description, the industry that you work with. Our members include stay at home moms, unemployed workers, bus drivers, musicians, baristas. It includes every worker.

Ed: So the other day you used the phrase “wobbling the workplace.” What do you mean by that, and do you have to be a Wobbly to do it?

DJ: Oh no, you certainly don’t have to be a wobbly to do it. If you talk to members of business unions, between contracts, if they take direct action, they refer to it as “wobbling.” Wobbling the job just means that you’re taking power back for the workforce. Earlier we were talking about the Seattle teachers who had formed a radical teacher’s association. (Ed: Social Equality Educators) They were wobbling the job.

DJ: Workers have the power to do it, but workers have to have shop floor democracy, have to be working from the shop floor up. That no-strike clause, what that does is that makes sure that the union boss keeps control of, because the first thing that happens if you have an illegal strike, is they threaten the union and the union president with fines, and the president with jail time. It’s all about keeping the workers under control. Because there’s no boss that can’t break any contract. Any smart lawyer can break any contract. All they have to do is shut down. It’s tougher for a union that signs a contract because the boss has the government behind him, forcing you through federal legislation to meet your obligations to the contract.

Ed: What advice would you give to somebody who was just starting out with organizing on the job?

DJ: My first advice would be to go the iww.org site and go on there and find out how to get an OT101.

DJ: The IWW’s not going to come in and take over and do the job for you. If you haven’t got the will to take care of your own life, your own future, then it’s not going to work! It is member-built, it’s a ground-up organization. Go slow. Don’t play your hand too soon. Wait until you’re organized and you’ve got a plan, and that you actually have some solidarity among the workers you’re going to be working with to fight the boss, and take on those problems.

Contact an IWW branch to find out if there’s an organizer training already scheduled, or if they can help you with organizing, and then bring in an actual organizing trainer. It’s just a weekend, and it’s a weekend out of your life that can make all the difference to the rest of your life. Certainly it will empower you. Even if you lose that job, even if you lose that fight, you’ve come away with so much information, so much knowledge.

Ed: So you’d be ready for the next one.